A PROFILE OF A DISCOVERER 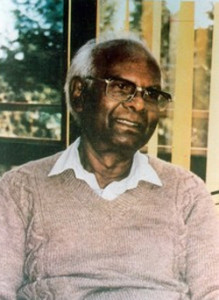 Rare gift to the medical world in general and Homoeopathy in particular was made in the form of new discovery of Transmission of Homoeo Drug Energy Transmission from A distance by great saint physician Dr.Bandhu Sahni.

Dr.Bandhu Sahni came from a very poor cultivator family. He was born on 17th January 1925 in a small village called Karkauli in the District of Darbhanga in Bihar.
At no stage of his career, Dr.Sahni’s interest on Homoeopathy flagged. . Encouraged and his interest made him complete his Homoeopathy from Sathi Homoeopathic Medical College in Darbhanga. This encouraged him to establish a charitable Homoeopathic Dispensary under the Social Education Scheme.
Dr. Sahni came out with his discovery on Transmission of Homoeo Drug Energy. In recognition for his invaluable research many academic bodies and institution for homoeopathic science has conferred upon him honorary degree and fellowship.

Dr. Sahni extended the philosophy of Dr. Hahnemann. His discovery of remote sensing technique of administering drugs, as against the conventional methods of administration of drugs through mouth in 1967, brought a revolutionary and far reaching changes in the field of medicine in general and Homoeopathy in particular. Today we can easily comprehend it in the light of distant transmission of various energy forms. As such a diseased person has a disoriented dynamic plane, which is needed to be resolved to normalcy. As such a dynamic medicine is needed. Dr. Hahnemann had earlier discovered the dynamic medicine by potent sing the medicine by extracting out the energy level of it. As such all Homoeopathic medicine are not commodities to be fed by mouth. They start acting as soon as they come in contact with the patient itself.

Dr.Mridul Kumar Sahani is a popular clinician and academician, well known to everybody in the field. He is the recipient of many awards for his excellence in education, research and dedicated service to the society. Besides his regular clinical practice, he teaches as a professor to the GD Memorial Homoeopathic Medical College & Hospital, Patna and also as a visiting professor to many colleges in India.
Dr M. K. Sahni born on 17th September 1952 has the distinction to be a son of great discoverer Dr. Bandhu Sahni. Unlike his father he imbibed the very spirit of Homoeopathy as being nurtured from the very childhood. He completed his Homoeopathic education of DHMS and started practicing under the guidance of his father and later on also joined as lecturer in Homoeopathic subjects at Bihar Homoeopathic Medical College and Hospital in the year 1979. His long journey in teaching accumulated as vast storehouse of information finally elevating to the authoritative level of professor. With his deep interest in Homoeopathic Philosophy and ambition to visualize in practice he mastered in Repertory, Materia Medica and Homoeopathic philosophy. Keeping the integrity of different facets of Homoeopathy remained his prime concern. Teaching and spreading the knowledge is the passion for him. He edited very popular magazine Homoeo Tarang in Hindi and Journal of Homoeo Transmission, which are widely appreciated. He served Homoeopathic education as teacher, guide at Postgraduate level and as examiner both at UG and PG level.
Dr M.K. Sahani’s perfectionist nature led him to work tirelessly.

He never retired until the work was completed. He had various activities related to Homoeopathy and was deeply involved in the foundation of Research Institute Of Sahni Drug Transmission & Homoeopathy at Patna for which he was the founder Managing Director and later on took up the highest position of it as Chairman.

Dr M.K. Sahani was formally elected as a member of the Central Council of Homoeopathy, where he served as member of the education committee for more than 12 years. Currently he is still serving as Chairman Education Committee of the great august body of Homoeopathy, constituted by Govt. of India.

Soft spoken Dr Sahani, with his compassionate nature has a healing touch for all his patients. Dr M.K. Sahani has given his lifetime dedication towards the development of homoeopathy